How to Overcome the Death of Autoplay Flash Video 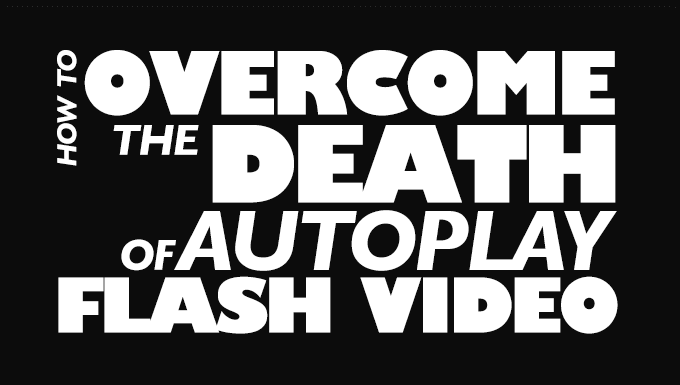 “Mr R” was in trouble. His top converting lander beat his next-best pages 9 to 1. Until Chrome stopped autoplaying his Flash video of a Doctor endorsing his product. You know the type: transparent background, pretty lady, white lab-coat. Those things work like gangbusters.

9 to 1! It’s a huge kick in the nuts to lose that kind of performance. Chrome owns around 30% of the market.

“So you recall in our checkout page we had the Doctor flash vid that showed? Well, then Chrome doesn’t autoplay flash any longer and it just shows a grey box. Probably only a matter of time before the other browsers follow suit.”

“Well, that damn thing converts at 9 to 1 so I need to find a solution. Figure you were the man to talk to. I need a clever quick solution.”, he wrote.

Bleeding money every hour of every day isn’t fun.

But trying to copy what he had going with Flash wasn’t going to be easy. Doing it right would cost $4k and take some time. “Mr R” didn’t have time.

So I suggested a quick workaround for $400. “It’ll work and it’ll be slightly less pretty than doing it the ‘right way’ but it’s better than losing the video entirely.”, I said.

Relieved, he emailed me back, “Thanks, at some point we will do it correctly, but for now let’s go with the 400 patch.”

And that’s what it’s like to have a “Tech Assassin” on your side. It’s not just about “perfect” but expensive $4k solutions that take weeks to do but also about $400 “quick hits” that “take care of a problem” in your organisation almost instantly.

You can bleed money or you can hire the The Tech Assassin. Your choice 😉

PS: And the only way to get me on retainer (at heavily discounted rates) is to do at least one “normal rates” project with me. That way, I know you’re the real deal. So if you’ve got a problem burning a hole in your pocket, it might be time to “take out a hit” with The Tech Assassin. Contact me.